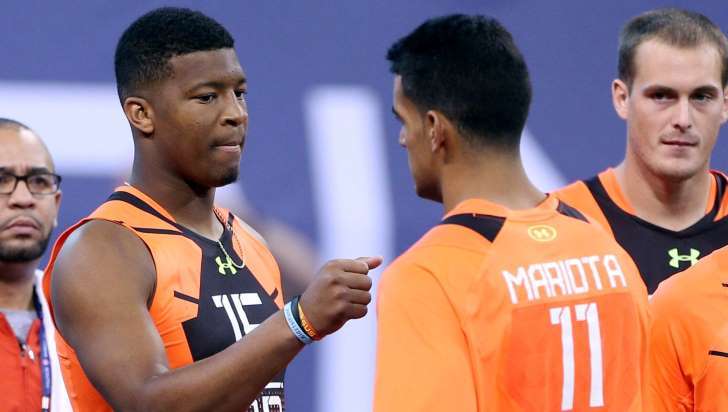 It would definitely look weird if the NFL draft is christened in Chicago on April 30, and the top two quarterbacks on the board — Jameis Winston and Marcus Mariota — are not in the building.

Embarrassing for the NFL? Yeah, right.

Embarrassing is when a high-profile player is seen on video knocking out his fiancée. Or when one of the biggest stars in the game is charged with child abuse. Or when a team owner is popped for DUI. Or when a star quarterback is busted for bankrolling a dogfighting ring.

The NFL has seen its shield tarnished in all sorts of ways. Failing to have Winston and/or Mariota present in the Windy City doesn't even rank in the big picture.

Marcus Mariota keys: Five things you must understand about QB


Every NFL draft has certain aspects of intrigue, and as we close in on the 2015 event, the most enticing question has become: Where will Marcus Mariota end up?

Yes, at this point, it seems like a foregone conclusion that the Tampa Bay Buccaneers will take Jameis Winston with the No. 1 overall pick on April 30. (See: Our uniformity over at Mock Draft Central.) Consequently, the intrigue lies in the No. 2 prospect at the game's most important position. Where would Mariota fit best? How quickly can the 2014 Heisman Trophy winner assimilate to the pro game? What can fans expect in Year 1 and beyond?

To answer those questions, there are certain things you have to know about Mariota. I dug deep on the Oregon product in a special edition of the Move The Sticks Podcast -- Marcus Mariota 360 -- evaluating what he brings to the table on and off the field. Drawing from that research, conversations with numerous football evaluators and my own personal scouting, here are five things you must understand if you're going to draft Marcus Mariota: 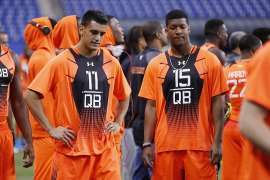 © Joe Robbins/Getty Images Jameis Winston is the
presumptive No. 1 pick in the draft, but why exactly is that?


In the not-too-distant past, there was a quarterback prospect who didn’t look quite like the others. He played at two schools. He ran almost as well as he passed. His arm was too weak, his body too small. Teams didn’t know what to do with him. So they ignored him. They didn’t consider the things he could do and magnified the things they thought he couldn’t. When draft day came, they took the quarterbacks who were taller (Ryan Tannehill). They took the quarterbacks with bigger arms (Brock Osweiler). Hell, they even took the quarterbacks who were 28 years old and possessed roughly the upside of a wilted cactus (Brandon Weeden). All because they looked the part. So the quarterback who was too small and too weak and too different tumbled down the draft board before being scooped up in the third round.

That quarterback was Russell Wilson.

Marcus Mariota left a huge impact at Oregon and the student athletes there are thanking him.

Mariota is expected to be a top pick in the upcoming NFL Draft, but before that he was a Heisman Trophy winner — the first for the school. He also set plenty of school records including career total offensive yards (13,089), career passing yards (10,801) and career passing touchdowns (105 TDs), to name a few.

Eeeech!....Tennesse Titans?......Extremely worried!! TT HC Wisenhunt's offense w/ brand new OC NOT a good fit for Mariota. No play makers at receiver. Somebody trade up with the Titans!!

With that said, wishing hard for all the luck to you Marcus!! You'll have tough job there. Fans there already "hating". No worries just feed off your heavy support from the west!! Neva mind dem.
Last edited by BullNuts808 on Fri May 01, 2015 7:19 am, edited 2 times in total.
Top

Ugh Titans. I wished they had taken the Eagles or Bears trade offer for the pick cause the Titans have no notable offensive weapons and a coaching staff that doesn't really seem to want Marcus despite picking him.
Top

Armour: Jameis Winston, Marcus Mariota will be measured against each other 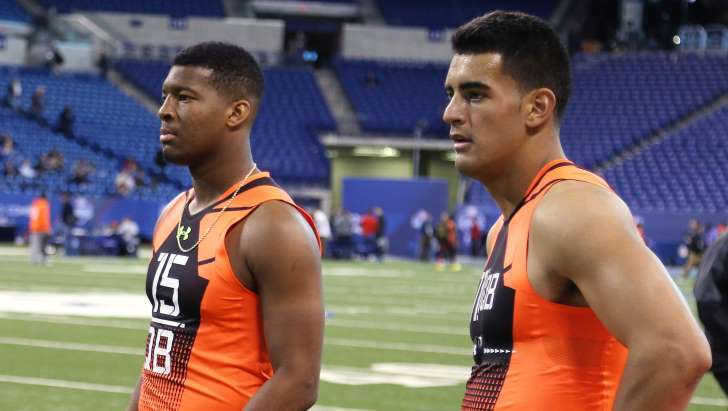 CHICAGO -- One thing is for certain about Jameis Winston: He won't make the same mistake as NFL Commissioner Roger Goodell.

Winston will hear Marcus Mariota's name so often that he'll not only know its correct pronunciation (it's MARE-ee-OH-tuh, commish), but what it means in Samoan.

A continent may have separated Winston and Mariota during Thursday's NFL draft, but they are now forever linked, a shadow neither will ever be able to shake. Their success in the NFL won't just be measured against the position where they were picked, but by the guy who went right before or right after.

"Thank you for accepting me as your quarterback right now," Winston said after the Tampa Bay Buccaneers made him the No. 1 pick. "And I'll look forward to getting in there with the guys and earning a spot and competing my tail off and bringing some wins."

Not to spoil Winston's draft party, but wins alone won't be enough. Nor a Super Bowl title or MVP trophy.

The Trade That Was Never Going to Happen

The nuts and bolts, first, about The Trades That Were Never Really Very Close, in the wake of the Titans—not Chip Kelly, not anyone else—selecting Oregon quarterback Marcus Mariota with the second pick in the 2015 NFL draft on Thursday night:

Still hoping for a trade!!! Titans didn't sign him yet. Get him outta dea. There's no hope for Tennesse strictly because they are a bad team with a worse organization. Its going to be too easy to blame Mariota if they don't do well.
Top 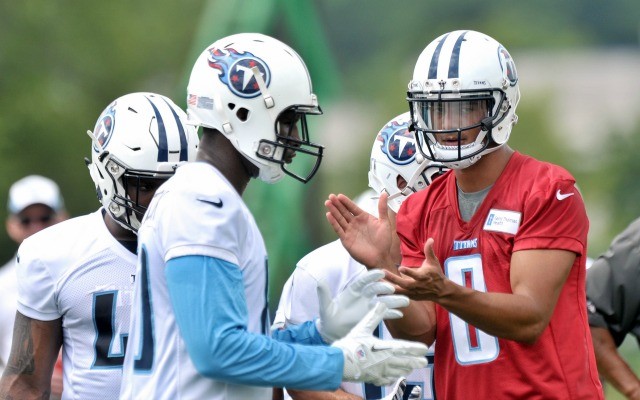 Mariota impressed his teammates during the first round of OTAs. (USATSI)

With three days of OTAs in the books for the Tennessee Titans, the team's wide receivers have officially gotten
acquainted with quarterback Marcus Mariota on the practice field. Their reviews are in -- so far, so good for the rookie out of Oregon.

First up: Justin Hunter, who has played both years of his career in Tennessee and, therefore, knows firsthand just how much the
Titans need a legitimate starting quarterback.

"We have to make the plays for him," Justin Hunter said via the Titans' team website, "even though he's a smooth guy. He's a real
good quarterback. I see it in him."

BullNuts808 wrote:Still hoping for a trade!!! Titans didn't sign him yet. Get him outta dea. There's no hope for Tennesse strictly because they are a bad team with a worse organization. Its going to be too easy to blame Mariota if they don't do well.

WOW....hard to argue with you on this BullNuts808...and he hasn't signed....not about money,so what gives? Owner? Coach? Teammates? I just want him to be successful...

Because in my mind,it's always clear...evil thoughts that twist my mind into despair- Iron Maiden
Top